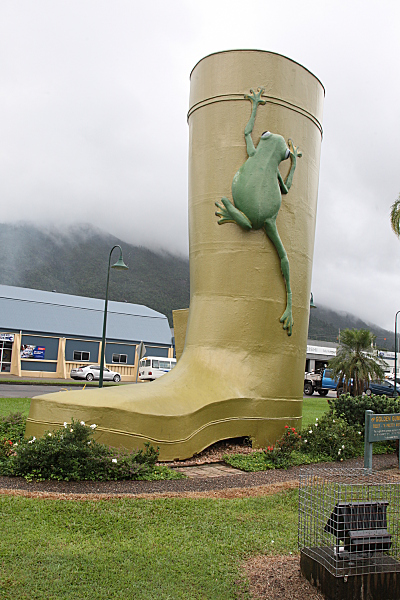 The idea of a Big Gumboot to enhance Tully’s image and welcome visitors was embraced by Tully community bodies in 1997.

The Tully Rotary and Lions Clubs obtained funding and donations from various sources. The boot was designed and fabricated by Brian Newell and officially opened on 10 May 2003. The total cost of the project was $90,000.

Made of fibreglass, the gumboot has an internal spiral staircase that leads to a viewing platform at the top.

Tully’s reputation for being “A Pretty Wet Place” is celebrated each year at the Golden Gumboot Festival. The ‘Gumboot Games’ are a major feature of this family oriented festival, along with a float parade, Golden Girl Quest and a big afternoon of entertainment, music, displays, children’s activities and food and market stalls. The Gumboot Festival is Tully’s major annual festival and each year a community organisation or a community project is selected to benefit from the festival proceeds.

Since the festival commenced in 2004 over $30,000 has been donated to local community organisations.

The Gumboot Festival will be held on Saturday 9 June 2012 at the Tully Showgrounds, commencing at 12 noon with entertainment by local youth bands.